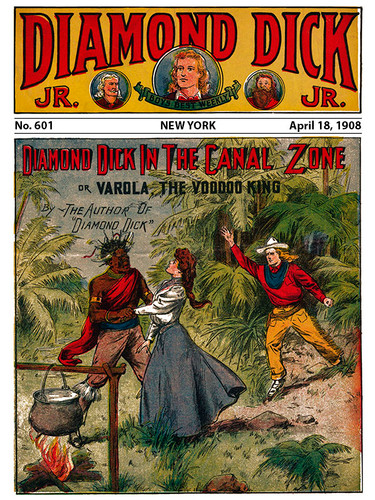 Originally published April 18, 1908, here is Diamond Dick, Jr. in the Canal Zone, or Varola the Voodoo King. Far from home, Dick faces off against the supernatural powers of a voodoo master, with the thrill-a-minute storytelling of a classic nickel weekly!

Diamond Dick, a fictional character created by William B. Schwartz, first appeared in Dashing Diamond Dick; or, The Sarpint of Siskiyou County, a serialized novel in Street and Smith's story paper New York Weekly in 1878, after which he became a series regular in Nugget Library, starting in the December 12, 1889 issue. According to J. Randolph Cox, "the character was undoubtedly inspired by the life and career of herbal-medicine promoter and showman George B. McClellan (ca. 1858-1911), who went by the nickname Diamond Dick and who was the hero of a dime novel by Buckskin Sam Hall."

The character's real name was Richard Wade. His son, Bertie Wade, was known as Diamond Dick, Jr. The series was known for occurring in real time. The characters aged and as the world changed with the advent of new techology, cars and other inventions were introduced. Dick was famous for wearing diamond-studded clothes. He was described as handsome, and he had dark hair and moustache.

The original serials were signed Delta Claveras, and the later weekly stories by the house name W. B. Lawson. Research suggests Theodore Dreiser may have written some stories and served as editor. George C. Jenks also wrote under this name, as did St George Henry Rathbone.

“Dick Donovan” was the pseudonym of James Edward Preston Murdock (1843–1934), an author of mysteries

Seven-foot-tall Grittel, daughter of the Lord of Sundoth, has refused the impossible marriage arrang

A classic Lost Race novel, originally pbulished in the December 1916 issue of The All-Around Magazin

Criminals, beware; the Scorpion is on your trail! Hoodlums fear his fury—and, for that matter,