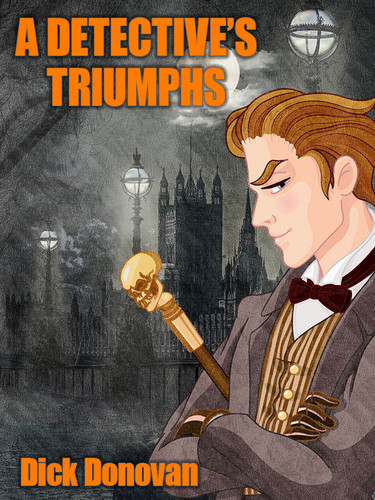 “Dick Donovan” was the pseudonym of James Edward Preston Murdock (1843–1934), an author of mysteries, thrillers, and horror stories. For a time, his popularity rivaled that of Arthur Conan Doyle—and he was certainly more prolific than Doyle. Between 1889 and 1922, he published nearly 300 mystery stories (many in series that were collected as books, such as this one.)

Many of Muddock’s mystery stories feature the character Dick Donovan, a Glasgow Detective, named for one of the 18th Century Bow Street Runners. The character was so popular that later stories were published under this pen name. Muddock also wrote true crime stories, horror, and 37 novels, most as “Dick Donovan.” His non-fiction included four history books, seven guidebooks for areas in the Alps and his autobiography. His stories were used by The Strand magazine in months when there were no Sherlock Holmes stories available.

Includes an introduction by Karl Wurf.

Originally published April 18, 1908, here is Diamond Dick, Jr. in the Canal Zone, or Varola the Vood

Stranded in space, his ship leading air, all power dead. It's quite a situation in which to find you

Confidences shares during bridge bring a dastardly plan to light. Can Primrose and Hyacinth, the Flo