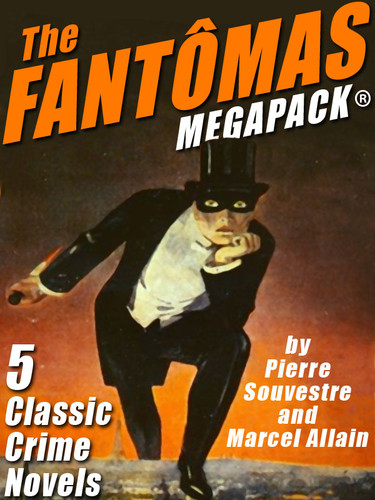 The Fantômas books, created and written by Pierre Souvestre and Marcel Allain, form one of the longest-running and most famous crime series in France. Fantômas first appeared in 1911 and was featured in a total of 32 volumes written by the two collaborators, then a subsequent 11 volumes written by Allain alone after Souvestre’s death. The character was also the basis of various film, television, and comic book adaptations. In the history of crime fiction, he represents a transition from Gothic novel villains of the 19th century to modern-day serial killers. This volume collects the first 5 books in the series:

The Adventures of Detective Juve in pursuit of a master in crime.

II. THE EXPLOITS OF JUVE

In this continuation Fantômas appears as the leader of a gang of Apaches, and as a physician of standing. Juve tracks the criminal to his secret hiding-place, but Fantômas escapes.

Filled with hair-raising incidents this tale is a fascinating recital of remarkable happenings in the life of the master-criminal of Paris.

IV. A NEST OF SPIES

In this volume Fantômas is an ambassador for a foreign power engaged in Paris in obtaining important military secrets for Germany. Detective Juve unmasks him, but the criminal again escapes.

This volume tells of the daring exploits of Fantômas in his attempts to get possession of the King of Hesse-Weimar’s famous diamond.

She went looking for excitement -- and found violence and danger instead! A Wildside Crime Classic b