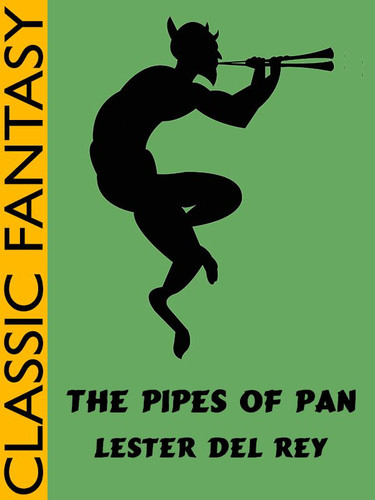 Pan recognized the lazy retreat to nature that had replaced his strong worship of old. He moved carefully through the tangled growth that made way for him, his cloven hoofs clicking sharply on the stones. It was a thin and saddened god that approached the house and gazed in through a hole that served as a window.

Inside, Frank Emmet lay on a rude pallet on the floor, a bag of his possessions beside him. Across from him was a stone fireplace, and between the two, nothing. A weak hand moved listlessly, brushing aside the vermin that knew his sickness; perhaps they sensed that the man was dying, and their time was short. He gave up and reached for a broken crock that contained water, but the effort was too great.

“Pan!” The man’s voice reached out, and the god stepped away from the window and through the warped doorway. He moved to the pallet and leaned over his follower. The man looked up.

King was a dog who had lost his master. But where was his master, Doc, in this ruined world that onc

The Terror Out of Space, by Leigh Brackett (epub/Kindle)

An eerie story of a silver land beneath the black Venusian seas. A grim tale of brooding terror whir

The Lady in the Case , by Lee E. Wells (epub/Kindle)

One by one the jilted men took drydives from hotel windows, and the search for the deadly blonde bec

George Kalen’s wife came all equipped for her new estate: looks, marriage license, and for a d

The hero is Hugh Dillon, who is taking criminal practice in order to get a foothold; the heroine is

The Apocalypse and Post-Apocalypse MEGAPACK® (epub/Kindle)

This volume is a follow-up to The Plague, Pestilence, and Apocalypse MEGAPACK® (2015) and contai

The Jewel of Bas, by Leigh Brackett (epub/Kindle)

There was a boy-God, sleeping through eternity. And there were his "Stone of Life" and the androids