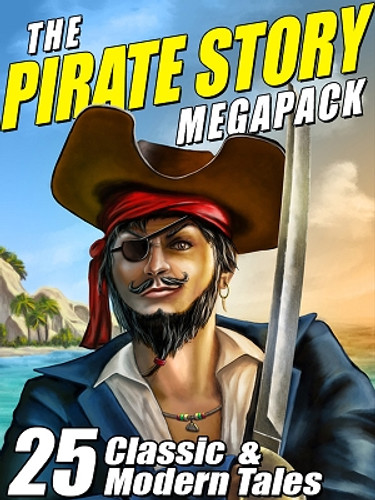 Pirates! Here are tales of the seven seas (and beyond!) by some of the greats of nautical fiction. From classics like Treasure Island and The Ghost Pirates, "The Pirate Story MEGAPACK™" is a thrill-a-minute compilation of more than 3,100 pages of great pirate tales, both historical and set in fantasy worlds. And not all pirates sail the seas... Included are:

THE GOLDEN DOLPHIN, by J. Allan Dunn
A SET OF ROGUES, by Frank Barrett
THE OFFSHORE PIRATE, by F. Scott Fitzgerald
A BRUSH WITH THE CHINESE, by G.A. Henty
THE MERCHANTMAN AND THE PIRATE, by Charles Reade
THE TREASURE OF THE SEAS, by James De Mille
THE PIRATE WOMAN, by Captain Dingle
THE MAROONER, by J. Allan Dunn
TREASURE ISLAND, by Robert Louis Stevenson
OUR PIRATE HOARD, by Thomas A. Janvier
THE PIRATE, by Frederick Marryat
THE ROVER'S SECRET, by Harry Collingwood
THE MADMAN AND THE PIRATE, by R.M. Ballantyne
WOLVES OF THE SEA, by Randall Parrish
THE IRON PIRATE, by Max Pemberton
FORCED LUCK, by J. Allan Dunn
THE PIRATE SHARK, by Elliott Whitney
THE FROZEN PIRATE, by W. Clark Russell
THE PIRATE ISLAND, by Harry Collingwood
THE GHOST OF CAPTAIN BRAND, by Howard Pyle
BLACK VULMEA'S VENGEANCE, by Robert E. Howard
THE GHOST PIRATES, by William Hope Hodgson
THE PIRATES OF CALUUR, by John Gregory Betancourt
THE BROTHERS LAMMIAT, by John Gregory Betancourt
SEA-CHILD, by Cynthia Ward

And if you enjoy this volume, don't forget to search your favorite ebook store for "Wildside Press MEGAPACK™" to see all the other entries in this great series, covering science fiction, fantasy, horror, mysteries, westerns, classics -- and much, much more!

The Wilkie Collins MEGAPACK™: 25 Classic Stories by the Author of The Moonstone (ePub/Kindle)

This volume assembles 15 complete novels by Mildred A. Wirts (writing as Mildred Benson). A rival to