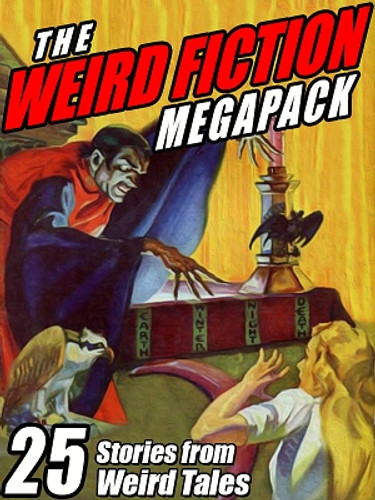 The Weird Fiction MEGAPACK™ collects both modern and classic stories from the classic pulp magazine, Weird Tales, with selections ranging throughout the 20th Century, but focusing mainly on the classic era of the 1930s. Included are works by many famous authors, such as H.P. Lovecraft, Robert E. Howard, Clark Ashton Smith, Manly Wade Wellman, E. Hoffmann Price, Tennessee Williams, and many more-with an emphasis on great but less-well-known stories that readers may not have encountered before. "To Become a Sorcerer," by Darrell Schweitzer (included here) was a finalist for the World Fantasy Award.

BOY BLUE, by Steve Rasnic Tem
TAP DANCING, by John Gregory Betancourt
TO BECOME A SORCERER, by Darrell Schweitzer
THE GOLGOTHA DANCERS, by Manly Wade Wellman
THE DEATH OF ILALOTHA, by Clark Ashton Smith
THE SALEM HORROR, by Henry Kuttner
THE DISINTERMENT, by H.P. Lovecraft and D.W. Rimel
THE SEA-WITCH, by Nictzin Dyalhis
VINE TERROR, by Howard Wandrei
THE PALE MAN, by Julius Long
WEREWOLF OF THE SAHARA, by G.G. Pendarves
TRAIN FOR FLUSHING, by Malcolm Jameson
THE DIARY OF PHILIP WESTERLY, by Paul Compton
MASK OF DEATH, by Paul Ernst
THE GIRL FROM SAMARCAND, by E. Hoffmann Price
THE MONKEY SPOONS, by Mary Elizabeth Counselman
THE VENGEANCE OF NITOCRIS, by Tennessee Williams
THE NINTH SKELETON, by Clark Ashton Smith
BIMINI, by Bassett Morgan
THE CURSE OF YIG, by H.P. Lovecraft and Zealia Bishop
THE HAUNTER OF THE RING, by Robert E. Howard
THE MEDICI BOOTS, by Pearl Norton Swet
THE LOST DOOR, by Dorothy Quick
DOOM OF THE HOUSE OF DURYEA, by Earl Peirce, Jr.
IN THE DARK, by Ronal Kayser

And don't forget to check out the other volumes in this series, covering science fiction, fantasy, horror, mystery, westerns, single author collections -- and much, much more! Search this ebookstore for "Wildside MEGAPACK™" to see the complete list.

The Haunts & Horrors MEGAPACK™ offers everything from ghosts to vampires, from t

Hours of great reading await, with tales from some of the 20th century's most renowned horror and da