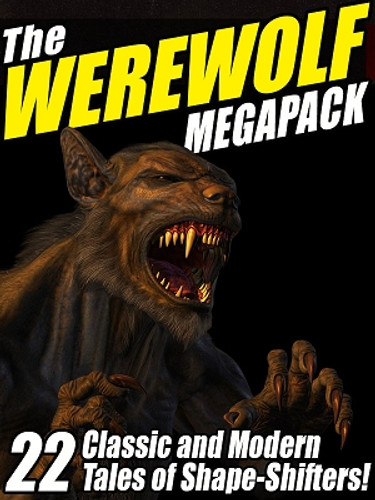 The Werewolf MEGAPACK™ collects 22 classic and modern tales of shape-shifters (and not just wolves!) -- including works by Jay Lake, Jack Williamson, Nina Kiriki Hoffman, John Gregory Betancourt, and many more. Included are:LEOPARD, by Jay LakeGABRIEL-ERNEST, by SakiSYMPATHY FOR WOLVES, by John Gregory BetancourtTHE DRONE, by Abraham MerrittTHE WERE-WOLF, by Clemence HousmanAND BOB'S YOUR UNCLE, by Chelsea Quinn YarbroTHE MARK OF THE BEAST, by Rudyard KiplingDUMPSTER DIVING, by Nina Kiriki HoffmanTHE WEREWOLF, by Eugene FieldTHE WOLF, by Guy de MaupassantWOLVES OF DARKNESS, by Jack WilliamsonTHE MAN WHO WAS CHANGED INTO A CROW, by P'u Sung-lingHUGUES, THE WER-WOLF, by Sutherland MenziesTHE WHITE WOLF OF THE HARTZ MOUNTAINS, by Frederick MarryatTHE SHE-WOLF, by SakiMORRAHA, by Joseph JacobsTHE OTHER SIDE: A BRETON LEGEND, by Eric StenbockTHE WHITE WOLF OF KOSTOPCHIN, by Sir Gilbert CampbellTHE WOLF LEADER, by Alexandre DumasTHE HUNTER'S MOON, by Michael McCarty & Terrie Leigh RelfWEREWOLF OF THE SAHARA, by G. G. Pendarves<BR>EVIL FORCES, by Gary LovisiAnd don't forget to search your favorite ebook store for "MEGAPACK™" or "Wildside MEGAPACK™" to see more entries in Wildside Press's MEGAPACK™ series, ranging from science fiction and fantasy to westerns, mysteries, ghost stories -- and much, much more!

Hours of great reading await, with tales from some of the 19th and 20th century's most renowned hor