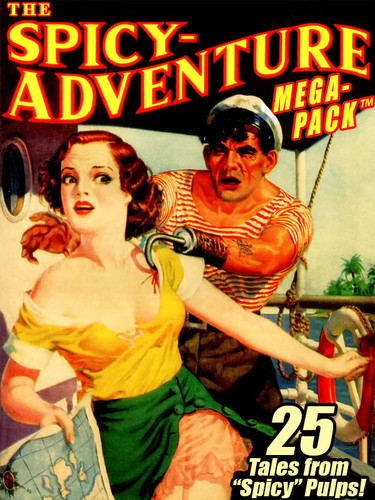 The pulp magazines of the early to mid 20th Century are often "politically incorrect" by modern standards. However, the "Spicy" magazines — Spicy-Adventure Stories, Spicy Mystery, Spicy Western, etc. — were politically incorrect by their own contemporary standards as well. With the occasional passing glimpse of a creamy-smooth thigh (or other womanly part!), and often filled with sexism, racism, and over-the-top plots and language, they nevertheless manage to titillate with more innuendo than anything else. If you find such things offensive, this is definitely not the right MEGAPACK™ for you. But if you enjoy the occasional stroll down the back alleys of pulp publishing, here’s a walk on the seamy side of the 1930s! Included are:

Apes! Sex fiends! Gangsters! Mad scientists! Tentacles! Yes, this MEGAPACK™ has them all,