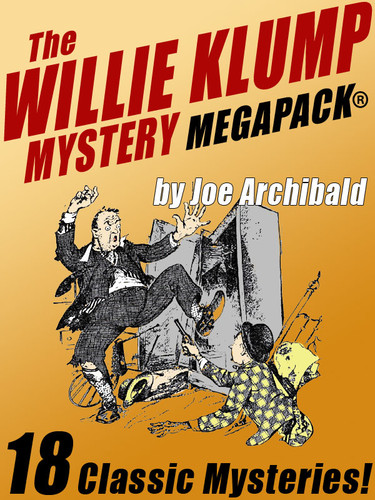 The character of William J. "Willie" Klump had quite a career in the pulps. He first appeared in Popular Detective magazine in 1938 and went on to appear in more than 60 stories over the next 21 years. Willie is something of a loser, but as a private detective he somehow always manages to get the job done (often with the help of friends, including his girlfriend and secretary, Gertie Mudgett, who often saves the day).

Willie was the creation of Joe Archibald (1898-1986), a prolific writer who published more than 900 stories in the pulps, digest, and "slick" magazines like Collier's and The Saturday Evening Post. He also illustrated prolifically for pulp magazines. Included in this volume are:

MURDER IN THE WORST DEGREE
MORGUE SHEET MUSIC
WHERE THERE'S A WILLIE THERE'S A WAY
AN ACE AND A PEAR
HUBBA HUBBA HOMICIDE
FIT TO BE TRIED
THE MOURNING AFTER
WHEN A BODY MEETS A BODY
PHOTO FINISH FOR A DAME
KLUMP A LA CARTE
STUCK WITH THE EVIDENCE
WHAT A SHAMUS!
STATE PENMANSHIP
DYING TO SEE WILLIE
THE GAT AND THE MOUSE
A LAM TO THE SLAUGHTER
OF DICE AND MEN!
CHEESECAKE AND WILLIE

Hours of great reading await, with mystery and crime tales from some of the 20th most renowned autho