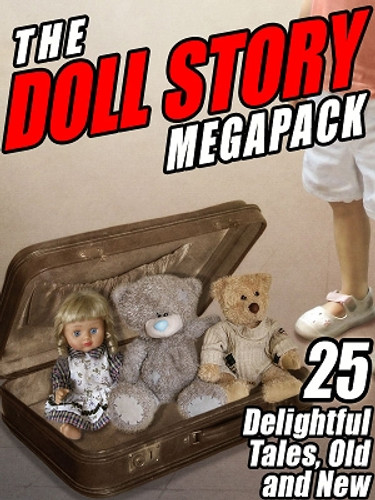 Dolls of all kinds have been loved by children and adults alike from the dawn of time. It's not surprising, then, that writers through the ages have been inspired to create fictional accounts that have thrilled the fans and readers of each new generation. THE DOLL MEGAPACK™ includes 25 stories, 6 poems, and a play.

Contents:
"Nutcracker and the King of Mice," by E. T. A. Hoffmann, translated by Alex. Ewing
"The Dead Doll" (poem), by Margaret Vandergrift
"The Doll," by Edmund Glasby
"The Doll's Ghost," by F. Marion Crawford
"Dame Crump" (poem), by Richard Hunter
"A Little Princess," by Frances Hodgson Burnett
"The Wooden Doll and the Wax Doll" (poem), by Jane Taylor and Ann Taylor
"The Doll," by Vernon Lee
"Smothered Dolls; or, The Girl Who Could Never Be Good," by A. R. Morlan
"The Doll's Wedding," by Aunt Fanny
"Two Poems" (poems), by L. Frank Baum
"Hex," by Larry M. Harris
"Dolly and I: A Story for Little Folks," by Oliver Optic
"The Dybbuk Dolls," by Jack Dann
"I Found My Poor Little Doll" (poem), by Charles Kingsley
"Lukundoo," by Edward Lucas White
"The Doll and Her Friends; or, Memoirs of the Lady Seraphina," by Julia Maitland
"Robina's Doll," by Mary R. S. Andrews
"The Doll of the White Devils," by Mary T. Van Denburgh
"The Rival Dolls" (play), by F. Anstey
"Doll," by Don Webb
"The Dolls' Journey from Minnesota to Maine," by Louisa May Alcott
"Ryna's Dolls," by Robert Reginald
"Mrs. Corter Makes Up Her Mind," by August W. Derleth
"Raggedy Ann Stories," by Johnny Gruelle
"The Man Who Wasn't Nice to Pumpkin Head Dolls," by Darrell Schweitzer
"The Wax Doll," by Anonymous
"Tiny Doll-Face," by Marilyn "Mattie" Brahen
"Racketty-Packetty House," by Frances Hodgson Burnett
"The Doll," by Barry Pain
"Dolly Putin," by Robert Reginald.
×

In Damien Broderick’s haunting tale, “The Meek,” the survivors of humanity’s drive toward racial sui