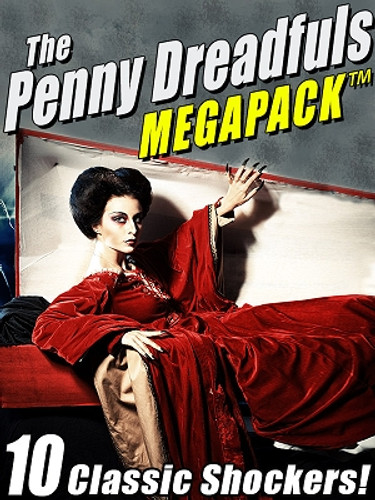 "Penny Dreadfuls" were a type of British publication in the 19th century that featured lurid serial stories appearing in parts over a number of weeks, each part costing one penny. The term, however, soon came to encompass a variety of publications that featured cheap sensational fiction. The penny dreadfuls were printed on cheap pulp paper and were aimed at young working class males. Two of the most famous were "Varney the Vampire" (which popularized vampires) and "The String of Pearls" (Sweeney Todd), both of which are included here, alongside other works which share the same gothic horror traditions. Included are:

FRANKENSTEIN, by Mary Wollstonecraft Shelley
DRACULA, by Bram Stoker
VARNEY, THE VAMPIRE, by Thomas Preskett Prest
THE WERE-WOLF, by Clemence Housman
THE PICTURE OF DORIAN GRAY, by Oscar Wilde
THE MONK, by Matthew Lewis
THE STRING OF PEARLS, by Thomas Peckett Prest
THE RING OF THOTH, by Sir Arthur Conan Doyle
THE STRANGE CASE OF DR. JEKYLL AND MR. HYDE, by Robert Louis Stevenson
THE FALL OF THE HOUSE OF USHER, by Edgar Allan Poe

If you enjoy this ebook, don't forget to search your favorite ebook store for "Wildside Press Megapack" to see more of the 180+ volumes in this series, covering adventure, historical fiction, mysteries, westerns, ghost stories, science fiction -- and much, much more!

This volume assembles 15 complete novels by Mildred A. Wirts (writing as Mildred Benson). A rival to

This volume in the MEGAPACK® series assembles classic Martian science fiction, including t

"The Pinocchio MEGAPACK™" include